Hi, we’re your hosts Laurie & Faye, and we’re excited to be opening our new, “Ultimate BnB” bed & breakfast. The unit is perfect for  1 or 2 people and is located on Vancouver Island (ranked # 7 In the Best Islands in the World: Reader’s Choice Awards 2015 by Conde Nast magazine) on the Westshore of Victoria BC, Canada.

About Us: It took nearly 40 years for us to find each other; another 3 years to ‘test the waters’ before taking the plunge. We married on July 15th, 1995 at Sooke Harbour House, a lovely seaside resort just down the road from our current home.

Putting together our Ultimate BnB has been a labour of love. For us, it has been one of those ‘someday’ projects…one we were never quite certain we would actually get to do.

Faye: “I come from a business background but my interests include music, food, gardening and travel. In the mid to late 80’s I was the GM at an import/export wholesaler in Winnipeg MB. It was an exciting time for me because we were among the first companies in Canada to develop trade with China and other countries in the Asian Pacific region. Laurie and I met in 1992 at an industry trade-show in Victoria, BC. While ‘testing the waters’ as Laurie likes to put it, we joined forces and began to grow our tourist retail business, Maple Leaf Gifts. We operated 2 gift shops that anchored either end of the Victoria Conference Centre in a perfect location right next to the famous Empress Hotel. We loved meeting people from around the world and many came back to visit us year after year. I must have made an impression because I was nominated for the City of Victoria’s hospitality award and won it 2 years running. After the successful sale of that business in the spring of 2002 we took some time for travel before launching our current consulting practice where we fill the CFO(Chief Financial Officer) role for a small group of business clients.”

Laurie: “I share many interests with Faye, but with a twist. I am a former professional musician. I graduated Grant McEwan University in Jazz performance in the 80’s while Faye was learning international trade! As an owner of Southern Sound Recording Studios I worked in sound engineering and production. I recorded albums for a variety of artists and worked on radio and TV commercials for both regional and national accounts. I have released an album and a CD under my own name as well. Several years back I was fortunate to be part of Victoria’s Jazz-Fest as a member of the George Essihos Quartet when we opened for Downbeat magazine’s male vocalist of the year, Kurt Elling at Alix Gooldin Hall.  In 2000, we were invited to appear on CBC Radio’s weekly jazz show ‘Hot Air’. At that time it was hosted by Paul Grant. The video posted below is a slide-show I put together from one of our many trips to Tofino, BC. I used the Bill Evans tune ‘Interplay’ that we recorded in Studio 2 in Vancouver as a ‘soundtrack’.

Faye & Laurie – Why we chose Victoria: “We met in Victoria. Like most transplants from elsewhere in Canada, we each, for separate, yet similar reasons looked to ‘find a way’ to live in the most beautiful part of this great country and to be able to enjoy its temperate climate year round. Truthfully, we simply wanted to escape those ferocious and legendary Canadian winters!”

One thought on “Your Hosts @ Ultimate BnB”

Follow Ultimate BnB…on the Westshore, Victoria BC on WordPress.com 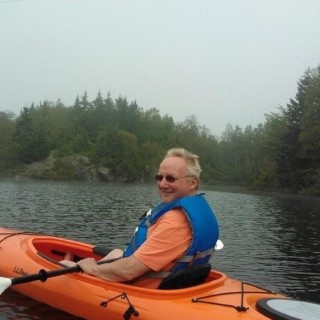 I'm a neophyte blogger. My wife and I are in the process of opening a new Bed and Breakfast called Ultimate BnB. I will be blogging about this for potential guests and anyone interested in the process. I wear a bunch of different hats, businessman, musician, flight-sim enthusiast, gardener, with a keen interest in philosophy and the cosmic universe. Luv to hear from any and all and Thank-you for saying hello. Btw, if you search Laurie Ingalls on YouTube you will find some of my musical work.

Original hand painted windows by Mario Labonte of Murals BC

all is not as it seems!

Travel advice and impressions of a colorful world

SUP DAYS are better than others
The Daily Post

The Art and Craft of Blogging

The latest news on WordPress.com and the WordPress community.

Ultimate BnB...on the Westshore, Victoria BC

...could it be YOUR ultimate getaway?